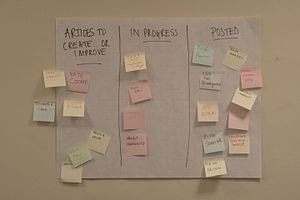 Hi Yaris678, I was the lead trainer at the Women in Classical Studies editathon. I saw the kanban in an Instagram post for an Art+Feminism editathon. It worked much better than expected - a fantastic indicator of the achievements of the day.Eartha78 (talk) 19:02, 3 February 2017 (GMT)

Cool. So how did you use it? Did you get people to brainstorm a load of post-its of articles to look at, at the beginning of the day? Did you just say 'if you have an idea, stick it on the board'? Did you come with the post-its filled out already? Yaris678 (talk) 10:25, 11 February 2017 (GMT)

The group were quite well prepared prior to the editathon. They had identified a number of articles to create - some had already done the research and started to writing in their sandbox. When we began the second part of the editathon they each committed to an article, wrote it on a sticky note and stuck it to the wall! Moving the notes from left to right was surprisingly motivating and a good excuse to stretch ones legs. Also used the sticky notes for an evaluation exercise at the end of the session. Eartha78 (talk) 18:27, 16 February 2017 (GMT)

Training from the back of the room

Another idea for editathons: Training from the back of the room. I recently went to a training course that used this approach and it was really good. I think it would work particularly well with something like an editathon, which isn't branded as training.

Rough outline of how it could work: