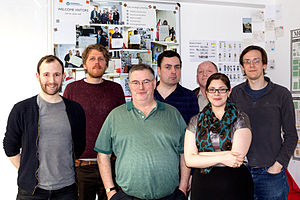 The participants of the event

Towards the end of 2013, WMUK have agreed to reflect on the programme’s successes and challenges through a review. The first stage of it, gathering of data, was run over March - April 2014, looking at the opinions of the residents, host institutions, and contribution from the community in general. We wanted to put a significant focus on exploring what the Residents thought about their projects, what would have helped them deliver their objectives, what tools and resources they found especially useful (or what they have produced themselves!).

This is why a small internal meeting was organised for 5 April 2014, in the WMUK office, where the past and current residents met to brainstorm the strengths, weaknesses, opportunities and threats of the programme as seen by them. It was part of the analysis we are doing particularly with regard to the UK sponsored WiR posts and one of a series of processes. It involved people who had been paid by WMUK or closely involved in that proocess looking at the particular issues that it brings up.

It's a similar process to that followed during the Train the Trainers review (small groups, individual interviews etc), which produced useful recommendations for the future of the programme.

We created a review document that will incorporate the survey responses, brainstorm day etc. - the full summary is here.

Dissemination and further discussion is important to this project, so that everyone's experiences can be incorporated. The initial results of the review were presented at the Culture part of Wikimania Fringe in June 2014, and the report was further disseminated when it was published at the end of July.