The GLAM Booklet 2013 is a 20 page booklet designed by Wikimedia UK in 2013. The purpose of the book is to be a physical handout for people in the Galleries, Libraries, Archives and Museums sector that introduces them to GLAM and Wikimedia, makes the case for the two to work together and gives some varied examples of cooperation between organisations..

This page is not part of the booklet, but instead explains the process. The subpages are text and pictures that are intended for individual pages in the book. To some extent the booklet is intended as a sister to the Wikipedia education Program booklet Case Studies:How Universities are teaching with Wikipedia though the design will reflect current Wikimedia UK design standards.

Apart from the front and back cover and pages 2 and 3, all pages are intended to work both individually and as double page spreads, this will be achieved either by having contrasting approaches to the same issue on facing pages, or by having related examples on facing pages.

As this is a UK product we are aiming to have at least one UK linked example in each pair. We also want to have contrasting examples in scale, both in terms of the size of the organisation and also of the extent of Wikimedia collaboration.

At some point in the future print on demand may fall to a price where we can afford to print batches of these for each event. But in the meantime we will follow the education example and not include any dates in the booklet.

The aim of the book is to tell a story, the story starts with the reason why we want to talk to them. It then goes into backstage passes, because these are guided tours of museums, and every cultural institution is comfortable giving a tour and talking about a tour.

This will contain a few paragraphs explaining what the booklet covers What have the British Library, the Smithsonian in Washington DC, the Palace of Versailles and the German Archaeological Institute in common? They have all worked with volunteers from Wikipedia.

Wikimedia Commons image File:Ours_nageant_(Musée_du_quai_Branly)_(3034045389).jpg A Dorset culture carving of a Polar Bear. Image uploaded by Wikimedian Russavia. With thanks to Jean-Pierre Dalbéra for taking the photograph and the Musée du quai Branly for allowing photography.

The Dorset People were a pre inuit people of what is now Greenland and the Canadian Arctic. The Wikipedia article on them is illustrated by this photograph of an exquisitely carved Polar Bear, part of their cultural legacy to the rest of humanity. So a photographer from Nice took a photograph in a French Museum of an object from Canada, and with the assistance of a Wikimedian from Australia that image sits on a computer in America, and after being added to the relevant Wikipedia article by a Londoner, is available to all humanity by the power of the internet.

There are various ways to measure Wikipedia and how close we are to completing our task; Some time ago Wikipedia reached a quantity threshold where people started to expect to find a Wikipedia article when they searched for something on the web. As early as 2012 a tenth of all the world’s adults and adolescents were visiting the site every month. So we are “in the ballpark” when it comes to quantity and reach, and for many wikimedians the time has come to put more focus on improving quality. Which is one of the reasons why we want to work with the heritage sector. The heritage sector has the imagery, expertise and reference sources that can help us transform the quality of Wikipedia; In return we think there are huge potential benefits for the heritage sector.

In the last few years there have been dozens of joint events around the world between Wikimedians and cultural institutions to further our common goal of making the sum of human knowledge available to all humanity. This booklet showcases some of those events and we hope will reassure and to an extent inspire anyone in the cultural sector who is thinking of partnering with Wikimedians.

A backstage pass is an opportunity for a group of experienced Wikipedians to tour "behind the scenes" at a cultural institution. Aside from building links between Wikimedians and subject experts, this has been an opportunity to take photographs without the reflection problems of glass display cases. 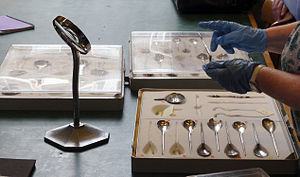 Undisplayed items from the Hoxne hoard. Photograph by Fæ during a backstage pass at the British Museum

Based on Tipu's Tiger The Victoria and Albert Museum in London hosted and supplied reference material for a joint Wikimedia UK and Wikimedia India editathon re Tipu's Tiger a musical instrument at the V&A that is of great interest on the sub continent]].

The V&A's curators weren't able to come in on the Saturday involved, but they did supply us with reference material which enabled the writing and improvement of wikipedia content across several languages. the handouts they gave us were amongst the material that started the reference library at Wikimedia India.

The editathon on the day at the V&A also included a group of editors in India via an IRC chat channel. This was one of our first experiments in multi national multi location editathons.

The V&A is commendably open about photography of most of their permanent collection and in this case released a high quality image to Wikimedia Commons.

One result of this is that the Tipu's Tiger article has been acknowledged as a "Good Article" by the internal quality assessment procedures on the English language wikipedia, and now exists in 14 other languages including Tamil. The V&A was able to use this program to enable source country virtual access to part of their cultural heritage.

Based on picturing Canada

This page gives the example of the British Library and Wikimedia and the release of a collection of Canadian images.

Wikimedia was cooperating with the British Library

A photomontage of GLAM sourced images naming the image, donor, photographer and a Wikipedia article that uses the image.

Wikimedia is grateful to all those people and organisations who share our aim of making the cultural heritage of humanity available to us all.

Lots of people come to Wikipedia because something is wrong on the internet and they want the world to know the truth.

Not everything on the Internet can be copied to Wikimedia Commons and not necessarily every image in a museum's collection either.

These are some of the issues that need to be considered before uploading images to Commons.

A backstage pass is an opportunity for a group of experienced Wikipedians to tour "behind the scenes" at a cultural institution. Aside from building links between Wikimedians and subject experts, this has been an opportunity to take photographs without the reflection problems of glass display cases.

Undisplayed items from the Hoxne hoard. Photograph by Fæ during a backstage pass at the British Museum

The back cover will contain:

Imagine a world in which every single human being can freely share in the sum of all knowledge.

Over 500 million different people consult Wikipedia every month via the Internet, plus unknown numbers via their mobile phone or by offline copies. We are very grateful to all those cultural institutions who are helping us improve the quality of Wikipedia and fill in the gaps.

All images and text are under a CC-BY-SA license unless otherwise stated. Trademarks and logos are not included in the creative commons license. Wikipedia, Wikimedia Commons, Wikimedia Foundation, MediaWiki are registered trademarks of the Wikimedia foundation.