The committee considered that there was room for more members. Any suggestions to Edward.

Edward and John Byrne are adding info re editathons.

Suggest an email to encourage people to sign up to the sessions they are going to attend so that any room changes can be done in advance.

JC to talk to JB re adding his event to the fringe.

Edward has created articles on streets around the Barbican.

JC explained that we have now beta tested the software and need to promote it to GLAMs via conferences etc.

All to suggest conferences worth exhibiting at.

AC raised a query as to whether the documentation had improved in recent months. AC to check.

Scanners: NHM have donated two which are now available for use by GLAM partners.

We need brochures and an application process to make things clearer for potential users.

JB declared an interest in the discussion as a potential applicant for future residencies.

JC mentioned that budget was available for other residencies if institutions were interested. 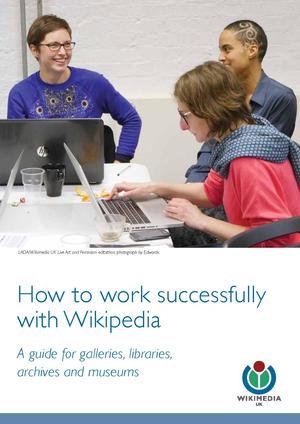 JC mentioned that the GLAM booklet was printed and would be available at Wikimania, EH said he was impressed by it, AC to email JC with a request for copies on her return to Scotland.

Date of Next Meeting[edit | edit source]