Below is the Wikimedia UK monthly report for the period 1 to 31 December 2011. If you want to keep up with the chapter's activities as they happen, please subscribe to our blog, join our mailing list, and/or follow us on Twitter. If you have any questions or comments, please drop us a line on this report's talk page.

See also the This Month in GLAM UK report for this month. 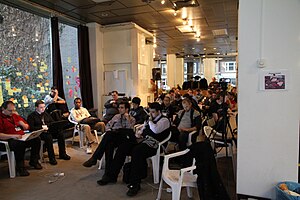 Martin Poulter met with academics and archivists in the area of psychology to discuss a range of events and other activities for Spring 2012 onwards. Martin also spoke at a social media lunch a the Institute of Physics in London, with representatives of various learned societies, to propose training events for their members. There is now an expert outreach section of the WMUK site, explaining what the chapter is doing and why scientists and scholars should get involved.

Press coverage of Wikipedia in UK publications this month included: 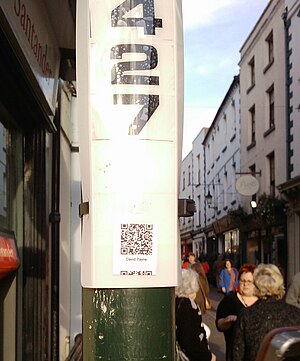 A QRpedia code mock-up. Used to demonstrate to Monmouth what it will look like.

For events in February and onwards, please see Events.

For more information on Jon's activities this month, see News from the Office.

For more information about our participation in this year's fundraiser, see 2011 Fundraiser.

7,254 of these donors have had Gift Aid Declarations made and matched with their records. If anyone would like a full (but anonymised) csv file with more information, please get in touch with Richard and let him know your requirements.

Richard Symonds was appointed as our new Office and Development Manager, starting in January 2012.

This month, Wikimedia UK began advertising for an Events Organiser. They will support the work of the grassroots Wikimedian community in the UK and be responsible for the budgeting and resources for Wikimedia events in the UK. Applications close January 10 2012.