Below is the Wikimedia UK monthly report for the period 1 to 30 November 2011. If you want to keep up with the chapter's activities as they happen, please subscribe to our blog, join our mailing list, and/or follow us on Twitter. If you have any questions or comments, please drop us a line on this report's talk page.

This has been a remarkable month for WMUK. Our new office opened; the UK fundraiser started and we webstreamed our board meeting. We have many education events and GLAM activities with our first hackathon in Brighton. We were involved in activities in India, England, Wales, Norway and the USA, with WMUK giving evidence in the Houses of Parliament. Our budget next year is about 50% bigger than last year. This was our first fundraiser as a registered charity and we are performing to plan. Each of these items is notable and there are others below. A year ago we had an event most weekends. We now have several activities happening on the same day and sometimes in several different countries. 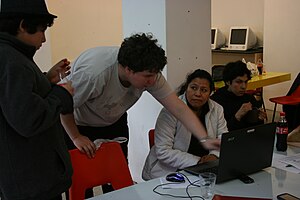 See also the This Month in GLAM UK report for November. 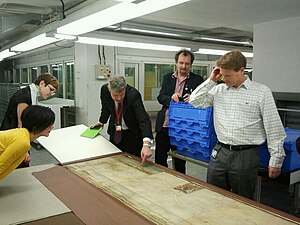 Behind the scenes at the National Archives.

Attendees came from different demographics: different genders and ages were all represented.

The weekend of the 19th-20th saw the UK's first ever Hackathon, in Brighton. The two-day event brought together Wikimedia Foundation developers as well as other new and experienced coders. Over 25 bugs were squashed, including a complex one involving GeSHi.

Press coverage of Wikipedia in UK publications this month included:

For events in January and onwards, please see Events.

Sue Gardner talking about editor retention during the full-board meeting.

For more information about our participation in this year's fundraiser, see 2011 Fundraiser.

We received £310,000 in donations from 19,000 donors via paypal this month, and expect to receive £206,000 from 19,000 donors via direct debit over the coming year. We have also received donations by cheque, postal order, Charities Aid Foundation, bank transfer and cash this month. For more information please see the daily Wikimedia fundraising statistics and our monthly fundraising report at Fundraising Report - Monthly Totals 2011.

This month we also began to allow donations via text.

Clocks showing the time in London and San Francisco, in our new offices.

On November 14, we moved into our new office, in the Old Street area of London. We are currently in the process of equipping it and welcome any donations. Currently only Chief Executive Jon Davies is in the office full time although visitors are welcome and one of our first was a visiting WMDE board member.

For more information on Jon's activities this month, see News from the Office.

Interviews for the Office & Development Manager were held at the the end of November with the recruitment agency ProspectUs. Six candidates were interviewed by our Chief Executive and one of the trustees - applicants were questioned not only on their financial and administrative knowledge, but also their knowledge of Wikimedia UK, the Wikimedia movement, and the ethos and goals of the individual projects.