Below is the Wikimedia UK monthly report for February 2012. If you want to keep up with the chapter's activities as they happen, please subscribe to our blog, join our mailing list, and/or follow us on Twitter. To see what we have planned in coming months, please visit our events page. If you have any questions or comments, please drop us a line on this report's talk page. 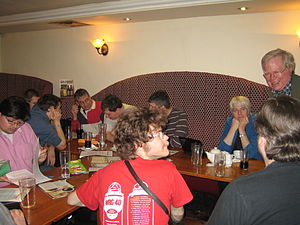 The Manchester Wikimeet this month.

The first Coventry meetup was held at The Litten Tree in Coventry. There was a good turnout of around a dozen Wikimedians, and discussions ranged from the purpose of Meta-Wiki to a new proposal for GAs. Another meetup in the city is being planned.

The 11th Manchester meetup took place at The Waterhouse, close to the Manchester Town Hall. With 15 people present, this was one of the most well-attended wikimeets to take place in Manchester. The next meetup in the city is planned for 28th April.

22nd - Steve Virgin speaking on 'Wikimedia UK - an opportunity, a challenge and a grand vision' at the FoodCycle Student Restaurant at the Anson Rooms, University of Bristol Students' Union

Elitism for the Masses

On the 29th, Martin Poulter spoke on "Elitism for the Masses" at an IDEoGRAMS seminar at the University of Leicester.

See also the This Month in GLAM UK report for this month.

Wikipedian in Residence at the British Library 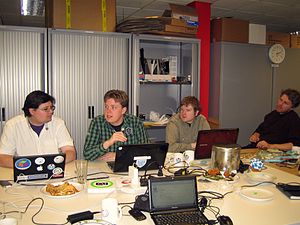 A brainstorming session focused on whether the UK should participate in Wiki Loves Monuments took place on the 18th February at the WMUK offices in London. The session led to the establishment of a steering group for WLM:UK 2012. For more details, see

On the 18th, Steve Virgin judged the Rusic hackday in Bristol. The winner was Ben Reid for his theme The web in colours - a tool for curating colour schemes from the web.

The February 2012 board meeting

There was a full board meeting at the charity's offices on 11-12th February. The agenda of the meeting is available at Agenda 11Feb12, and the outcomes are at Minutes 11Feb12.

We were pleased to welcome our third member of staff in five months and a number of people who had shown interest in becoming a trustee. For the first time the board had advertised for non-Wikipedians to broaden our approach. We now have staff and Jon Davies had arranged to have a large number of draft policies which were nearly all agreed. A volunteer policy was presented by Tom Dalton. On the Sunday the trustees presented the work they had led since the last board meeting. Not all the items were dealt with but this meant that the board were able to join the 54th London meetup and remind ourselves of our membership.

On the 17th-19th, Wikimedia UK trustees Chris Keating and Mike Peel attended the global Finance meeting 2012 in Paris, France. This meeting focused on furthering the debate about which Wikimedia organisations should be able to fundraise via the Wikimedia projects. A key outcome of the meeting was the intention to establish a Wikimedia Chapters Council in the next few months, which will be responsible for the representation, accountability and development of the Wikimedia chapters, as well as facilitating knowledge exchange between the chapters.

This month, we received £4,441.70 in one-off donations, with 211 individual donations. The average donation amount was £21.05. 98 of these donors have had Gift Aid Declarations made and matched with their records. If anyone would like a full (but anonymised) csv file with more information, please get in touch with richard.symonds

wikimedia.org.uk and let him know your requirements. 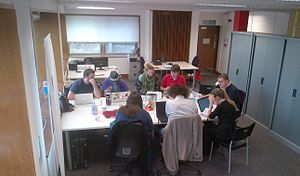 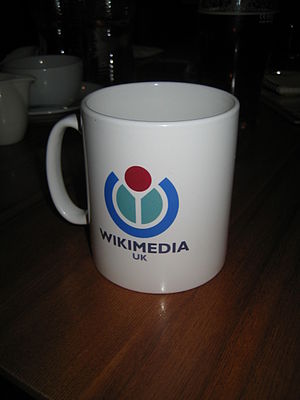 One of the new "Wikimedia UK" mugs.

When we established our office, we made sure that there was enough desk space for the four employees that we planned to hire this year. However, we have found that we are having a significant number of visitors to the office, including Wikimedia community members, visitors from other organisations, and Wikimedia UK trustees. As such, we have decided to increase the number of desks at the WMUK office from four to six, to make sure we have hot desking capacity available for visitors. Our hot desking facilities include a large-screen monitor as well as a USB keyboard and mouse, and refreshments, to ensure that visitors are welcome.

In addition, the floor of Development House that our office is located on will be re-modeled in the next few weeks. We are hoping that a sofa area will be set up, which will mean that there will be even more room for visitors who want to come and edit - or just chat with a cup of tea.

We held a 'Learn to Edit day' at the Wikimedia UK Offices, which was the first of many to come. Several Wikimedia volunteers were in attendance, along with four charities and two companies.

We have received a letter from the UK's Advertising Standards Authority stating that they had had a complaint from a member of the public regarding our allegedly misleading banner advertisements on Wikipedia during the annual Wikimedia fundraiser. After soliciting input from our lawyers and the Wikimedia Foundation, we have responded to this letter explaining the banners that we ran in November and December last year. Although we don't have permission to post the ASA's letter (it is copyrighted), our own reply to them is posted here. More information is available in the March report

After an exhaustive search, Daria Cybulska will be joining Wikimedia UK on March 1st as our Events Organiser. She will be focusing on providing logistical support for our volunteer-led events, taking the strain off Richard Symonds (our Office and Development Manager), Jon Davies (our Chief Exec) and our Trustees, and will help to kick-start our programme of events and activities over the next few years.