Below is the Wikimedia UK monthly report for the period 1 to 30 November 2012. If you want to keep up with the chapter's activities as they happen, please subscribe to our blog, join a UK mailing list, and/or follow us on Twitter. If you have any questions or comments, please drop us a line on this report's talk page. 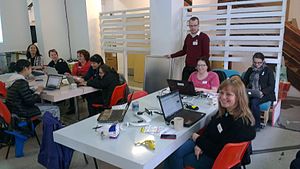 On Sunday 25 November Manchester was the scene of a Girl Geeks training event. There were 12 attendees were introduced to Wikipedia and began improving coverage of women in science. The Manchester Girl Geeks have been getting involved with Wikipedia since 2011, and this event continued the link. They were keen to get involved in editing at a later date and it is hoped that more such events can be arranged in the future.

November saw Wikipedia's article on Operation Barras under review to become a Featured Article. The article, which details an operation in 2000 by the British Army to free five of its soldiers captured in Sierra Leone, was nominated on 23 October and promoted on 8 December. The work was the initiative of HJ Mitchell whose endeavour was supported by a WMUK microgrant which allowed the relevant books to be purchased. The drive saw the article grow from a few hundred words to its current size of 5,600 words. While Operation Barras is the marque article, there have also been improvements to other related articles.

We have been working on this with the BM for a long time. The exhibition has now been announced -"Ice Age art: arrival of the modern mind" BM page. It will run from 7 February – 26 May 2013. We have been given the list of BM objects that will be included, and expect the full list of loan objects, mostly from European museums, shortly, once this is finalized. There are 31 BM objects in the exhibition, of which we have Commons photos of 18, mostly from the 2011 day at Franks House, and articles on 7. Any additions are most welcome. All have the key information, and sometimes more, on the BM collections database. The Commons photos are most easily found at the Commons page: Objects in Sieveking, Ann "A catalogue of Palaeolithic art in the British Museum", which uses the same BM Sieveking "Palart" catalogue references as the BM database.

Please see the project page for more detail. Much of the exhibition will then travel to Santander in Spain, which gives us an exciting opportunity to link with Spanish (and of course Catalan) Wikipedians.

On 4 November a backstage pass with editathon was held at the Royal Birmingham Society of Artists gallery, facilitated by Andy Mabbett (User:Pigsonthewing), who has previously trained the gallery's staff and volunteers to edit Wikipedia. A small team of experienced and new Wikipedians were given access to the the society's small, but richly populated archives and wrote articles about a number of notable past Members and Associates of the Society and took photographs of objects and ephemera. The gallery donated a CD-ROM containing the digitised contents of the sketch book of Henry Harris Lines, which await uploading to Wikimedia Commons.

Andrew Gray, the Wikipedian in Residence at the British Library, has been working with a collection of around 40,000 books made available by the British Library from a previous digitisation program. These are not yet widely available online due to their size, but can be uploaded on request to Commons or to Wikisource. All suggestions for new material are welcome - the collection appears particularly strong in local histories and travelogues.

The first fully transcribed book has been completed on Wikisource - A Journey in Khorassan and Central Asia, an 1890 travelogue by an English diplomat and his wife in eastern Persia and Russian Central Asia.

In related news, Andy Mabbett has secured a role as a Wikipedian in Residence at Staffordshire Archives and Heritage Service. This is independent of the Chapter, but very interesting. You can learn more about Andy's work here.

Emmanuel and Tom were taken on as contractors & the first development meeting was held in the Wikimedia UK offices. A plan was agreed to migrate Wikimedia UK websites, email, mailing lists and other services to a multi-server Rackspace cloud. Initial work was undertaken prior to a major push in December/January to complete the migration.

Tom and Emmanuel have been documenting their work, and the new infrastructure, at IT Development.

For events in February 2013 and onwards, please see Events.

The Board held a full board meeting on 17-18 November in our London office. You can see the agenda here, the minutes here and the reports here

For information on Jon's activities this month, see News from the Office.

The key area of importance in communications this month was a series of articles published in The Times about the influence and activities of some PR agencies on Wikipedia. The stories were fairly significant in that they highlighted the widespread manipulation of Wikipedia by agencies on behalf of their clients. One of the stories even made the front page. Given that the journalists from The Times were open and transparent about their research and interviewed Jimmy Wales to present a Wikipedian view, the story was sympathetic to the Wikimedia movement. The story gained relatively little traction across other outlets, although The Telegraph and The Observer both ran online pieces.

Below are links to press coverage related to Wikimedia UK in November.

This month, we received £1,810.87 in one-off donations, with 79 individual donations. The average donation amount was £22.92 - 74% of these donors have had Gift Aid Declarations made and matched with their records. If anyone would like a full (but anonymised) csv file with more information, please get in touch with katherine.bavage

There were 5,555 successful direct debits this month, bringing in a total of £22,256.49. Further figures are pending the return of one of our staff members.

This adds up to 265 members who are eligible to vote

The steep change in 'New and Current' to 'Grace' reflects the numbers of memberships taken out in previous fundraiser periods. A specific chase up email will go out in January 2013 to all grace members on top of the automated notice of grace period email.