Below is the Wikimedia UK monthly report for the period 1 to 31 October 2012. If you want to keep up with the chapter's activities as they happen, please subscribe to our blog, join our mailing list, and/or follow us on Twitter. If you have any questions or comments, please drop us a line on this report's talk page.

The London School of Economics' Impact of Social Sciences blog ran a guest post by Martin Poulter, "Writing for Wikipedia has forced me into good scholarly habits and accessible writing". This asks academics to view Wikipedia as an opportunity to write about their own fields and as an opportunity for educational assignments.

Martin Poulter, Charles Matthews, Tom Morris and Edward Harding delivered a day workshop at for the JISC Digital Infrastructure team at the JISC headquarters in London. Many of the trainees had managerial or leadership roles in elearning, research infrastructure or digital humanities. As well as basic editing, the workshop looked at different kinds of effort to improve Wikipedia, and how the different Wikimedia Projects work together to provide a "digital infrastructure" for each other and the wider web. 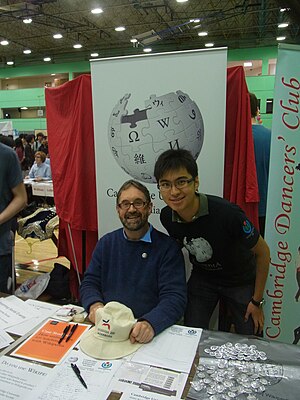 Two microgrants have been approved this month.

A number of microgrants were marked as completed this month, including:

A list of recent press coverage can be seen here.

For events in December and onwards, please see Events.

The Board's main activity during October was the appointment (jointly with the Wikimedia Foundation) of Mike Hudson and Compass Partnership to conduct an independent review of our governance arrangements. This was the principal topic of discussion at our Board phone call on 9 October (minutes), and by the end of October the review was underway.

On 10 October we received the conclusions from a financial review from Garfield Byrd, the Wikimedia Foundation's Chief of Finance and Administration. These have now been published along with a plan setting out our plans to address the issues raised in both Garfield's report and that of our auditors.

For information on Jon's activities this month, see News from the Office.
The updates about the Wikimedia UK Interns can be found there too, together with here.

October was a month for repositioning our communications. The discussions around governance continued, culminating in the appointment of Compass Partnership to conduct the WMUK / WMF commissioned independent governance review. The biggest communications success this month was Ada Lovelace Day. This was the result of much excellent work by Daria and the team at the Royal Society. The event gained widespread media coverage and received an excellent reception on social media. You can see a comprehensive list of coverage on the event's page. October's press coverage is recorded in the attached document, along with coverage from September. In other news, discussions have begun on how we can improve the monthly reports. Suggestions include developing a Signpost-style newsletter, featuring content created by WMUK members, volunteers and UK-based editors. Get involved in the discussion here. Blog posts in October:

This month, we received £443.26 in one-off donations, with 13 individual donations. The average donation amount was £34.09 - 62% of these donors have had Gift Aid Declarations made and matched with their records. If anyone would like a full (but anonymised) csv file with more information, please get in touch with katherine.bavage

As for direct debit donations, there were 5349 successful direct debits this month, bringing in a total of £20,917.12.

This adds up to 249 members who are eligible to vote

A membership survey was distributed on 30th October 2012 , the results were made public as part of the reports to the Board meeting of 17th November 2012. You can view them here (pdf)