Below is the Wikimedia UK monthly report for the period 1st to 30th November 2013. If you want to keep up with the chapter's activities as they happen, please subscribe to our blog, join a UK mailing list, and/or follow us on Twitter. If you have any questions or comments, please drop us a line on this report's talk page.

The second Cardiff wikimeet took place at the beginning of the month with around twenty Members turning up as well as a few local non-Members.

For the first time, the BBC have dipped their toe into open content waters, releasing three extracts from Radio 4 programmes from their archives, 'Desert Island Discs and 'Today' under CC-by licences, as a prelude to releasing around 200 more at an event London on 18 January 2014 (book via that link). The donation came at the behest of Wikimedian Andy Mabbett, who is running the project with the BBC and has written about the initiative on his blog.

The tour of the Mining Institute

The North of England Institute of Mining and Mechanical Engineers in Newcastle upon Tyne was the site of an edit-a-thon relating to the institute's collection. Robert Forsythe delivered a report on the event, which included a tour round the collections, and there was enthusiasm for the topic, with one attendee travelling from the other side of the country to be there. The institute is considering a future event based around their collection so there may be more to come!

The Wikimedian in Residence at the National Library of Scotland organised an edit-a-thon on the subject of early photography. Topics included the Edinburgh Calotype Club, the oldest photography club in the world, and participants were able to access the Library's digital collections. An editing session with the University of Edinburgh's PhotoSoc is also being considered. In Glasgow an edit-a-thon was run on the topic of Scottish women on Wikipedia on Sunday 16th November. Details of the outcomes can be found here.

There was a strong photography theme in November. Building on the success of Wiki Loves Monuments, a Wiki Takes event was organised based around London's tube system. The idea was to take photographs of Grade I and II* listed buildings which weren't covered on Commons and were within easy reach of tube stations. Towards the end of the month there was an edit-a-thon-cum-photography-session at Conway Hall in London, with nine articles created.

The Humanities Research Institute at the University of Sheffield hosted a workshop on "Wikimedia: linking research impact and open education". This is part of a series being delivered by Martin Poulter in universities around the country as part of the collaboration between Jisc and Wikimedia UK. The goal is to make educators, researchers and other people in universities aware of ways they can work productively with the Wikimedia projects, and to get them to commit to specific "next steps". Among the 27 attendees from across the university were some MA students in topics such as public engagement and digital librarianship. Evaluation forms and reflections are written up on the Wikimedia UK wiki. A quickie version of the workshop also took place at the EduWiki conference.

Also in his Jisc Wikimedia Ambassador capacity, Martin attended a day event on "enhancing discoverability" of digital resources such as scanned documents. He and other speakers shared perspectives on how to promote the finding and use of small collections of scholarly digital content in universities and cultural institutions. His in-person presentation and written briefing are feeding into national advice which will be published in the coming months. He also spoke to the Jisc Innovation Group - a meeting of programme directors and managers - about new developments in Wikimedia and the role of free and open content in Wikimedia's success.

Following Robin Owain's meeting with Prof. Iwan Davies, Deputy Vice Chancellor of Swansea University in August, he has now met Dr Tom Cheesman and Dr Rhys Jones, other lecturers and students representatives. Tom's WikiProject, hopefully, will use crowd sourcing to gather and organise knowledge of worldwide versions of the Works of Shakespeare: "WOW!" Will in Other Words.

On 1-2 November we have delivered an annual education conference. To watch a brilliant video summary of the event please see below. 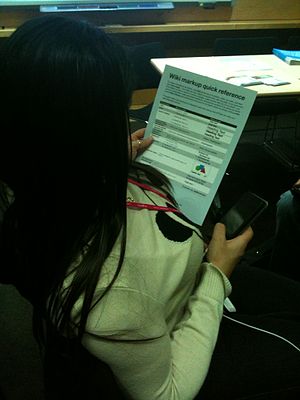 On Friday and Saturday, 8 and 9 November, Brian Kelly and Toni Sant attended the SpotOn conference (formerly known as Science Online), renewing WMUK presence at this large, high-profile annual event hosted by Nature Publishing Group, aimed at people interested in how science is carried out and communicated online.

They ran an Introduction to Wikipedia workshop for newcomers on the second day of the conference and Brian blogged about it here.

23 SpotOn conference delegates (10 female and 13 male) attended this session. We were also able to observe that there were 14 postgraduate students, while the rest were academics, researchers, or other non-students.

Photos from the workshop are also available on Wikimedia Commons.

Planning for the WLM UK prize giving took place in November. Scheduled for 10th December, the prize giving was part of a community day with a photography session in the afternoon followed by an open day in the evening.

For events in December 2013 and onwards, please see Events.

In November the WMUK board co-opted three new trustees, Simon Knight Padmini Ray Murray, and Joseph Seddon, to bring the number of members up to ten.

Simon and Joseph's terms run until the 2014 AGM, while Padmini's runs until November 2015.

Please see the above links to relevant press coverage received in November and blog posts published during the same period. In other news, the chapter was represented by volunteers and staf at the Open Government Partnership which examines the ways that governments can be more open with information and data. The Free Knowledge Advocacy Group - representing a group of European Wikimedia chapters, met in London and created their collective statement of intent. This work is ongoing. A piece of wider work looking at how Wikipedia could be used in different settings, including young offenders' institutions, public libraries and places with no internet access was begun. Stevie presented to a Nexters meetup at Somerset House(a group of social tech entrepreneurs) about open licences and the Wikimedia projects.

This month, we received £233.00 in one-off donations, with 8 individual donations. The average donation amount was £29.12 - 75% of these donors have had Gift Aid Declarations made and matched with their records. If anyone would like a full (but anonymised) csv file with more information, please get in touch with katherine.bavage

Up to 30th November 2013 there were 238 members of the charity eligible to vote.

The first brochure in Welsh was published in time for the EduWiki at Cardiff.

Visitors this month included members from other Wikimedia chapters in to discuss Free Knowledge Advocacy Group EU, and attendees or speakers that attended EduWiki 2013 such as Rod Dunican (WMF) and Michal Lester (WMIL). Other visitors included: