Below is the Wikimedia UK monthly report for the period 1st to 31st March 2014. If you want to keep up with the chapter's activities as they happen, please subscribe to our blog, join a UK mailing list, and/or follow us on Twitter. If you have any questions or comments, please drop us a line on this report's talk page.

March was a diverse month both in the focus on diversity or international Women's day and in geographic diversity, with events in York, Dundee and the Midlands as well as London, a very high proportion of UK Wikimedians will have had an event within a couple of hours travel.

Andy Mabbett led an event at the West Midlands Police Museum, gaining access for Wikipedians to a museum that is usually only open to researchers by appointment. A number of articles were improved, and, thanks to the curators kindly removing glass fronts from display cases, many great pictures were taken (some still awaiting transfer from Flickr). This was probably the first UK editathon to be visited by an armed response vehicle, whose crew kindly posed for pictures, and displayed some of their specialist equipment, on the proviso that their faces were not shown!

w:User:Fae and the other attendees at the Petrie museum of archaeology

Wikimedia UK supported international Women's day with support for two events. One at Goldsmiths is covered in the Education and Expert outreach section and a GLAM one on female archaeologists at the Petrie Museum. The event at the Petrie Museum was sufficiently successful that we are planning a fringe event for just after Wikimania.

Pat Hadley, the Wikimedian in Residence at the Yorkshire Museums trust, hosted an editathon in York.

On 28 March, a number of volunteers delivered an all-day training session in the library of the Royal Society of Chemistry's impressive London headquarters, Burlington House, on Piccadilly. The audience included RSC staff, fellows and guests, including academics and journal editors.

John Byrne's Report for February and March is here

Submissions closed for this year's Wikimania with 64 in the GLAM and Free Culture track. The programme committee is currently assessing them and the hundreds of other submissions, one of their criteria for choosing what goes in the programme is the level of interest, so please look through the submissions and sign up for the ones you would most like to see.

Negotiations were taking place with several organisations for some large content releases, and Fae is working to setup a mass upload of the 100,000 Welcome trust images.

Please see respective links for each of these activities for futher details. 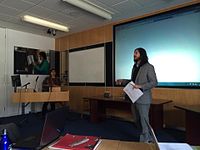 Volunteer Brian Kelly attended WMRS EduWiki Conference 2014 in Serbia through support from WMUK. He has posted the following blog posts about this experience: preparation + report.

For more about the kick-off meeting in Prague see this Education newsletter post.

The cooperative is technically still in formation and is presently only operating under a working name. Aims, goals, scope and other essential elements for any such grouping are still to be codified, but co-op members are already formulating these ahead of a potential official launch at Wikimania 2014.

Dr Martin Poulter continues as Wikimedia Ambassador with Jisc. See his report on the most recent Education Newsletter.

Preliminary planning for a fringe/hack event ahead of Wikimania (21-22 June) continued during this month. Details here.

Information about project grants that are currently running, and how to submit an application of your own, are at Project grants/Applications.

The Economist - WikiPeaks? The popular encyclopedia must work out what is next

For events in April 2014 and onwards, please see Events.

The chapter was approached by both Sky News and ITN this month with a view to finding someone to speak about Wikimedia and Wikipedia in relation to the 25th anniversary of the World Wide Web. Unfortunately to the story of the missing Malaysia Airlines jet, the segment was bumped both times. The approaches show that we are making progress in terms of recognition and awareness.

Please see the above links to relevant press coverage received in January and blog posts published during the same period.

This month, we received £588 in one-off donations, with 20 individual donations. The average donation amount was £29.40 - of the donations that were eligible for gift aid, 65% had Gift Aid Declarations made and matched with their records. If anyone would like a full (but anonymised) csv file with more information, please get in touch with katherine.bavageatwikimedia.org.uk and let her know your requirements.

The Chapter's donor newsletter was distributed at the beginning of March by the WMF to all UK donors on their contact database. This saw a high number of new sign-ups. All new members were accepted and welcomed swiftly. It is to be hoped future such sign ups will be repeated to broaden the Chapters' membership base.

The office received 46 visitors this month.