Below is the Wikimedia UK monthly report for the period 1st to 31st May 2014. If you want to keep up with the chapter's activities as they happen, please subscribe to our blog, join a UK mailing list, and/or follow us on Twitter. If you have any questions or comments, please drop us a line on this report's talk page.

The proposal for funding to support an editathon on 29 May on the topics related to genetics has been approved.

Information about project grants that are currently running, and how to submit an application of your own, are at Project grants/Applications.

Almost a year after the first Wikipedia event there, a second editathon was held at Queen Street Mill, Burnley, organised by Wikipedian-in-Residence, Andy Mabbett. New and experienced editors collaborated on a number of articles (including Tinker, Shenton & Co and Steaming process in Lancashire cotton mills) and took numerous photographs and video recordings of machinery demonstrations conducted especially for the attendees.

The Metropolitan Police (the police service for London, England) have indicated that they are willing to consider requests to open licence some of their images - not least the scenic (as opposed to scene-of-crime) pictures taken from their helicopters, and/ or images posted to their social media accounts, but will do so on an individual (not blanket) basis. Requests may be sent to: DMC-Mailbox-.PressBureau-DMC@met.pnn.police.uk

Brian Kelly gave a talk to Librarians in Wales on the theme of "Editing Wikipedia: Why You Should and How You Can Support Your Users".

No public events in May, but The Royal Society journals offer was open for most of the month, and other work continued. 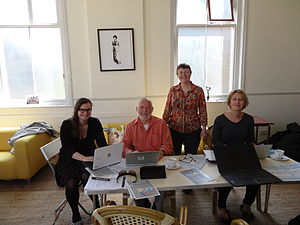 Wadewitz memorial editathon (Carbon Caryatid standing) with three of the new editors. The picture on the wall is of en:Mary Wollstonecraft

Carbon Caryatid hosted a Wikimedia editathon in the Mary Wollstonecraft room at Newington Green as part of the Wadewitz memorial programme.

Wikimania is coming to London for the 8-10th August 2014, both preceded and followed by a fringe of events that will have something of a GLAM focus - including a couple of editathons.

Registrations have opened and several hundred people have already booked, and most of the contents of the GLAM track have been settled. We hope to hold the GLAM meetup for Wikimania during the 4.30-6.30 slot on Friday afternoon.

We always knew that the mass upload tool had the capability to break the wiki by throwing very large amounts of data at it, and that has been tested recently. Guidelines are now being established for how big an upload needs to be before you need to notify the developers.

The plan now is to improve the documentation before Wikimania, and to use Wikimania to show relevant Wikimedians how to use this software and how to persuade our GLAM partners to use it.

WMUK is supporting a Wiki Workshop for Geographers at the Royal Geographical Society (1 Kensington Gore, London SW7 2AR) on Monday 7th July 2014, 1pm-5pm. Registration for this expert outreach event opened in May. 2-3 trainers are needed for this event, one of whom will need to act as lead trainer. Travel expenses will be covered as usual. Sign up on this page, if you're willing to join in as a trainer.

Plans for The Future of Education workshop to be held 21-22 June as a Wikimania 2014 Fringe event entered the final stage during this month. Registration opened at the start of May remained open until the second week of June. It is expected that up to 30 participants will be attending this two-day workshop at the Barbican in preparation for the Future of Education track at Wikimania 2014.

This event looks to raise awareness of the educational possibilities of Wikipedia and sister projects, and developing Wikimedia UK's academic engagement. A survey about WMUK's education activities around EduWiki was circulated in May 2014 to attendees of the EduWiki conferences organised in previous years. It is envisioned that the responses from this survey will help enhance the programme for EduWiki 2014 and further engagement with the event attendees over the years.

The second planning meeting for the EduWiki Conference 2014 was held on the 29th of May via Skype. The most important outcome of this meeting was a decision on the venue for the event, following the separate quotes acquired from possible venues in Edinburgh. The conference will be held at Edinburgh First's St Leonard's Hall (University of Edinburgh) on Friday 31 October. Latest details about this event are available through this wiki page.

A survey about WMUK's education activities around EduWiki has been circulated to attendees of the conferences organised in 2012 and 2013. It is envisioned that the responses from this survey will help enhance the programme for EduWiki 2014 and further engagement with the event attendees over the years.

We have taken time to look back at the education activities in the first half of 2014. Since January, the UK chapter has organised and/or supported a wide variety of events. Here is an annotated list of all the Education-related events that have taken place until the end of May 2014:

These are the most recent events in a string of education outreach activities which will continue throughout 2014. My WMUK colleague Richard Nevell and Toni Sant are in the process of collating basic information (mainly usernames and contact details, where appropriate) from all participants at these events to ensure appropriate follow-up and engagement through future education-related activities.

The Technology Committee met on 6 May with three attendees. The minutes of the meeting can be found here.

For events in June 2014 and onwards, please see Events.

There has been a bit of discussion about stopping these reports, as they're redundant now that we have the much more thorough FDC reporting structure. We'll do a survey on this later in the year.

Both the Governance Committee and the Audit and Risk Committee met in May, in advance of the full board meeting in June. The minutes from the meetings can be found here and here.

A very busy month. Lots of follow-on from last month's coverage of vandalism to the Wikipedia article about Hillsborough. I have booked media training from some staff and volunteers ahead of Wikimania and this will take place in July. The first draft of the annual review is complete and, following a round of amends will be going to our designer. Bekka Kahn officially began work as the Open Coalition Project Co-ordinator. More of the communications for Wikimania are being brought in-house to the chapter and Stevie will be leading on much of this. An interesting project is developing with Demos, WMUK and the Open Coalition, which will see attempts to crowdsource evidence to the Speaker of the House of Commons on ways to encourage participation in digital democracy. A speaking slot has been secured for Toni Sant at a high profile conference on community education and learning. Late in the month a story appeared relating to the quality of health-related articles on Wikipedia in several of the larger nationals. Comment and quotes from the chapter appeared and the story shifted in tone slightly as a result.

One more significant "win" to report. A couple of phonecalls to the International Olympic Committee in Geneva secured full media accreditation for a Wikinews reporter to cover the Youth Olympic Games in China. This is a significant breakthrough and shows a growing credibility of both Wikinews and Wikimedia UK.

Please see the above links to relevant press coverage received in May and blog posts published during the same period.

This month, we received £10 from an individual donation. If anyone would like a full (but anonymised) csv file with more information, please get in touch with katherine.bavageatwikimedia.org.uk and let her know your requirements.

The office was visited 48 times in May.