From Wikimedia UK
< Talk:Main Page
Jump to navigation Jump to search
This is an archive page, please do not edit here. This page is for discussion threads that are dormant. 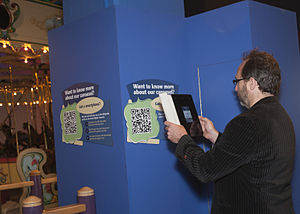 Jimmy Wales uses a tablet computer to scan QRpedia codes in the Children's Museum of Indianapolis.

Launched in April this year, QRpedia was developed out of the partnership with Derby Museum and Art Gallery by Wikimedia UK member Roger Bamkin and Terence Eden, a mobile web consultant. This idea has been one of twenty mobile phone innovations shortlisted for the SMART-UK awards. On Monday 23rd the judges will be deciding on the final six. QRpedia codes are installed in Indianapolis, Derby, London. Barcelona and St Petersburg. New projects are underway in Wales and the Netherlands. Please feel free to tweet Good luck to #QRpedia at the @smartukproject awards from #WMUK. It would be good to see who has the wittiest retweets. Did you know there is a QRpedia code on the oldest computer in Bletchley Park, the Magna Carta and on the Domesday Book?

Its the world wide crowd sourced support that has made this such a success with art galleries, museums, archives, libraries and now Monmouthshire County Council have agreed that we can document a whole town. MonmouthpediA has already led to over 40 new articles on the small Welsh town of Monmouth. We intend to have 1,000 QRpedia codes installed by April and many of you have helped already - Thanks.

I'm wondering if Wikimedia UK has any policies/thoughts/plans regarding the upcoming London Olympic Games. The reason I ask this is that I read an article recently that LOCOG and the IOC are really cracking down on media during the Games. They're apparently even disallowing public spectators from taking photos and publishing them in any way, potentially even to their Facebook profiles. This is going to have significant implications for publishing photos of anything relating to the Games on Wikimedia and I assume that we may not be legally allowed to do it, although it remains to be seen if they decide to enforce it. In any case, it seems to me that if we had press passes available, there would be fewer restrictions on what we could publish.

I'm a London based photographer with a fairly extensive collection of contributions to Wikimedia, and I would be happy to be involved in this. I'm already planning to photograph the road cycling and marathon events as they pass through the streets of London. I don't have any tickets for the ticketed events, although I'd certainly be interested in photographing them if a press pass was made available, slim though the chances of this may be. :-) Press passes, generally speaking, have been discussed in the past on the Wikipedia Featured Pictures Candidates page, but I'm not sure that anything really came of it. Certainly not that I was aware of, anyway.

You should have a look at Microgrants/Wikinews reporter IDs which is discussing this. Filceolaire (talk) 12:48, 15 April 2012 (UTC)

We did enquire at one stage whether we could get some press passes, but it didn't get anywhere, unfortunately.
Regarding the IOC's attempt to prohibit lots of things - I don't believe it has been discussed, though it I'm also interested in thinking what we might do about it! The prohibition on individuals uploading material shot at the Olympics to to Wikimedia projects seems to stem from point 19.6.3 of the Terms and Conditions of ticket purchase, though I wouldn't be surprised if there was something in the legislation about it as well. I don't think that the Wikimedia Foundation normally considers the fact that an image may have been taking in violation of such terms and conditions to be a good reason for removing an image from Wikimedia Commons, say, though it's not impossible that LOCOG might try to pursue an individual through the courts. I think it would probably be worthwhile for Wikimedia UK to raise the question of what the Wikimedia Foundation's position would be with their General Counsel. The Land (talk) 12:55, 15 April 2012 (UTC)

I wonder whether we could follow the example that Wikimedia Deutschland set with photographing members of parliament, and set up an area just outside of the olympic committee's control where we could invite athletes to come and have a portrait photo taken to be used in their Wikipedia article (and have a chat about their Wikipedia biographies at the same time)? Mike Peel (talk) 22:00, 15 April 2012 (UTC)

Nope, it's outside of the olympic village. In the absolute worst case scenario, we could send requests to athletes to call around the WMUK offices in Old Street whilst they're in the city. That's in London, not France. ;-) Mike Peel (talk) 23:09, 15 April 2012 (UTC)

You're not going to be allowed to set something like that up just outside the village. It will never happen. And athletes aren't going to be interested in visiting the office to have their photo taken. The athletes are hardly going to be visiting the outside world at all - they'll even be travelling on specially closed roads to get to the venues. --Tango (talk) 23:23, 15 April 2012 (UTC)

It is probably more practical to promote the idea with the general public to upload or email in their snapshots to be posted on Commons (or identify their Flickr stream as an automatic feed for some categories). A project page on Commons with a list of identified helpers (probably linking to a similar project page on Wikinews) would be an excuse to run an advert in the Metro or similar. By the way, I'm not volunteering to take this on, we would need someone to lead it. --Fæ (talk) 09:55, 16 April 2012 (UTC)

We shouldn't be encouraging the general public to violate the terms and conditions of their tickets, though. --Tango (talk) 11:35, 16 April 2012 (UTC)

Of course, this would be for photos outside of the stadium itself unless a registered journalist wanted to release some of their "official" photos. Presumably people inside can still take photos away from the event areas, such as parties of contestants taking photos of themselves behind the scenes, but I have no idea how those restrictions should work. --Fæ (talk) 12:37, 16 April 2012 (UTC)

So for now, we don't have any official plans in place to document the Olympics (press passes etc), except to hope that contributors upload their photos but we're not sure if that may make them liable to be sued... Jolly good. ;-) Diliff (talk) 06:20, 18 April 2012 (UTC)

I was specifically refering to the Upcoming events of the WMUK Main Page, which is protected. I certainly agree that they aren't really WMUK events, I just thought if they are goimng to be mentioned on the mainpage, it would be nice if it was up to date.Leutha (talk) 20:14, 15 April 2012 (UTC)

This talk page and Water cooler seem to be doing the same job. Can I suggest that they are somehow merged together (perhaps by redirecting this talk page to the water cooler), and archived at the same time? Would anyone be up for figuring out how to merge them and their archives? Thanks. Mike Peel (talk) 22:04, 15 April 2012 (UTC)

They shouldn't be doing the same job. This should be a page for discussing the main page. The notice at the top already says to go to the water cooler for general discussion - perhaps we should make that notice more noticeable? If this page weren't being used for general discussion so much, I wouldn't have misunderstood the request for the upcoming events to be updated! I thought it was some general discussion when actually it was a comment about the main page being put, quite correctly, on the main page's talk page. That's the kind of thing that should be here. --Tango (talk) 22:59, 15 April 2012 (UTC)

Cant get my answers to questions on page. I have tried, god knows I have tried!!![edit source]

Maybe its just me, but I have been trying to get my answers onto the relevant section for 3 days now.

Doesn't matter what laptop I use, whether I am signed in or not.

If this is part of the election please email tellers

wikimedia.org.uk who will help you out or me through Special:EmailUser/Fæ if you prefer and I'll help in whatever way I can. Cheers Fæ (talk) 10:06, 6 May 2012 (UTC)

Yes Fae, I have, but not getting anywhere. Have phoned Friday Saturday even got a mobile number form google for rs, but nothing.

I am editing and save page just as I do here, and have done this so many times I have lost count, but it will not update.

I know this is a bit cheeky, but if I email the block of answers to you could you place it on my section. Don't want to identify myself here as it could cause some embarrassment! —Preceding unsigned comment added by 188.28.136.32 (talk • contribs)

No problem, send me an email using the link above (and explain who you are!). I am cautious about editing other candidate statements, but if you email me, I can't see any procedural issue with simply pasting it unedited in to help you out as simple housekeeping. You can double check how it looks to make sure you are completely happy, and the tellers are free to change or comment if there is a problem. Cheers --Fæ (talk) 10:55, 6 May 2012 (UTC)

Since we didn't really get far with the discussion on photography at the Olympics, and it seems that we're not going to have any progress between now and the Olympics, I wanted to ask two further questions.

As far as I can see, the restrictions on commercial photography are detailed by LOCOG as part of the conditions of entry with the ticket. Does this therefore not apply to the free events taking place not on private Olympics property, but on public land? I'm thinking of the Cycling Road Race, Marathon, etc. What I'm not sure of is whether my right to take photos of things in public override the Olympics' rights to restrict photography within their 'sphere of influence', and whether these restrictions can be enforced in public space.
Also, if I were to take photos which LOCOG would be within their rights to restrict commercial photography of, do the restrictions actually apply to me or do they only apply to those using the photo for commercial purposes? My uploading photos to Wikipedia in itself is not commercial, but the standard CC-BY-SA licence specifically allows the commercial photography. If I were to release the photos under this licence and say "LOCOG does not permit this Olympic photography to be used commercially, use at your own risk", would they be permitted to be published on Wikimedia Commons?

As far as I know, LOCOG can't restrict what you can do in public places, although there have been special Acts of Parliament for the Olympics, so without reading those I can't be sure they don't give LOCOG such powers. As for your second question, it might be legal (I don't know), but I don't think it would be in keeping with Commons policy. --Tango (talk) 11:44, 18 June 2012 (UTC)

Hi, as raised at the Board meeting today, can someone please remove the link to wikimediauk-l from the contact section as this gives the impression that it is a member's or chapter list? I would do this but I can't figure it out right now. Thanks --Fæ (talk) 16:57, 17 November 2012 (UTC)

I've just taken a look but think it needs to be an edit made in the background HTML as it isn't in the wiki - seems to be in a template. When this gets updated, if someone could also suggest they can like us on Facebook - facebook.com/WikimediaUK - that would be great. Thank you. --Stevie Benton (WMUK) (talk) 17:17, 17 November 2012 (UTC)