Getting to the venue[edit source]

HJ Mitchell asked "How easy is it to get to on public transport from Manchester Piccadilly?"

Oldham Library is a about a quarter of a mile from Oldham Mumps Metrolink station. On a Saturday, trams from Piccadilly to Rochdale (which goes through Oldham Mumps) are every 12 minutes. Richard Nevell (WMUK) (talk) 17:43, 19 March 2013 (UTC)

Thoughts on the event[edit source] 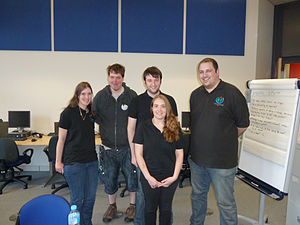 Well, since Yaris678 wrote such an excellent report on the last training event I went to, I thought I'd write this one up. I signed up for the training event quite late and assumed that Deskana was leading it, as his name was on top. After a few emails, we decided that because he was so busy, it'd be a good idea that I ran the course, so spent a little time preparing the course. Wikipedia:User:Staceydolxx helped out by creating some Yes/No cards. This allowed us to adapt Stacey, Mike and Rich's training for trainers presentation on reliable sources - focussing primarily on Oldham, which I passed to wikipedia:User:Deskana and wikipedia:user:Julia W to give them a chance to lead part of the session. I also created a new user wikipedia:User:Worm That Trains, so that we could demonstrate things from a new users point of view.

Big day arrived, we were there an hour early and met Gareth, the guy who organised the event from the council's side. After a few minutes setting up and realising the projector had a distinctly green tinge, we sat and waited. Unfortunately, although nearly 15 people signed up, only 4 turned up, including Gareth - Wikipedia:User:Jem8830, Wikipedia:User:Robotsoap84, Wikipedia:User:Septemviralis and Wikipedia:User:StuCharl. We did our housekeeping and introductions and gave the trainees an idea of the scale of the project. That meant giving them some stats, showing them the edit button video, talking about the five pillars and showing a live feed of edits being made. 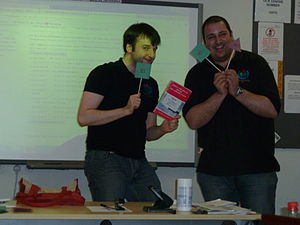 Around this time, Wikipedia:User:Survivor Services turned up, not realising we started at 10, not 11. Julia W brought him up to speed, whilst Deskana and I carried on until our break. We followed a plan similar to the sammple session written by RexxS and everyone follwed along nicely. We could probably have moved on to some more advanced stuff earlier - given how well the trainees were picking stuff up.

After lunch, we talked about what could go wrong on Wikipedia, which lead very nicely into the Yes/No reliable sources game. This worked very well, as it was clear that people have different ideas about what makes a source reliable. It was generally agreed that BBC website was reliable, but there were a lot of people who felt a council's website would have to be considered a partisan source. It was quite enlightening. Excellent presentation and discussion of the topic made it a success. From that point, we went into 1-1 discussion, allowing people to create articles in their sandbox or make edits.

Overall, it went really well. One of the trainees specifically made a point of saying the presentation all went well and that the pacing was good. Feedback was generally good, and the primary criticism was that they could have done with more advanced stuff. It'd be a good idea to decide who is leading the training a little earlier, but otherwise I can't think of that many ways to improve matters. WormTT(talk) 15:21, 5 May 2013 (UTC)

Feedback from the attendees[edit source]

Was very positive, and included:

Feedback from the host[edit source]

"Numbers aside, I was very impressed with the WikimediaUK team’s delivery of the event and the bits of feedback I’ve had from people who attended has been positive too. I felt the workshop was productive for everyone involved and catered to beginners and dabblers well." - Gareth Wood