The Hypatia Trust, with support from Wikimedia UK, is developing a project to rebalance the gender bias of the English-language Wikipedia.[1] By targeting existing and creating new articles on the lives and achievements of women who have originated in Cornwall and the Isles of Scilly, or who have lived and worked in the region, the project will increase and improve the quality of articles on Cornish women. This project also injects a rural perspective to Wikipedia editing and subjects.

Photograph taken at the Royal Institution of Cornwall's Courtney Library during a research and study visit organised by the Hypatia Trust to find sources on Cornish women's history.

Dr Tehmina Goskar has been appointed as the Hypatia Trust's first Wikimedian In Residence. She will lead the project from September 2016 to March 2017, and will recruit and coordinate a small network of researchers with the primary aim of writing and editing biographical articles on women in Cornwall and Scilly for the English-language Wikipedia.

This page explains the project's aims and will document progress of the, provide a place for discussion, and provides news about forthcoming events related to the projects, such as training and editathons. If you are interested in getting involved in Wikimedia events organised at the Hypatia Trust, or in contributing to this project, please contact the Wikimedian In Residence.

The List article on notable women in Cornwall and the Isles of Scilly is published. Editors can choose to improve content to existing articles or create new article stubs.

About the Hypatia Trust[edit | edit source]

The Hypatia Trust is a UK-registered charity based in Penzance, Cornwall (reg. 1060663).[2] Its stated charitable activities are: “to advance the education of the public by maintaining, developing, protecting and making available to the public the Hypatia Library, focusing on literary, artistic and scientific works of women, with emphasis on public service and cultural appreciation. Based in Penzance, Cornwall with international connection to the USA, Germany, Australasia and Africa.” Inspired by the philosopher and mathematician, Hypatia of Alexandria, Dr. Melissa Hardie-Budden MBE founded the Hypatia Trust in 1996. In practice the Hypatia Trust operates as a loose collective of individuals with a common ideal and common aim: to promote and raise the profile of women and women’s works in their communities.

The Hypatia Trust’s principal activities have focused on establishing a distributed library consisting mainly of books but also including some archives and artworks. The guiding principle behind this distributed library is to facilitate public access to knowledge by and about women on a wide variety of subjects and geographical foci. Together with collecting, the Hypatia Trust has led or supported various projects and series of educational programmes, including public engagement community events on women’s heritage (History 51), creative writing online and exhibitions on women.

History 51 was a HLF supported women's heritage project organised by the Hypatia Trust in 2013. Its programme of volunteer and community engagement provided an indication of the appetite for a what is possible when pioneering new interest in historical and cultural subjects from women's perspectives. Over the last twenty years the Hypatia Trust has worked in the context of the male-dominated narratives on Cornish art, literature, press, politics, identity and history. Access to female subject matter and role models remains hard to access and discourses about Cornish identity in particular remain highly gender unbalanced. Given the historic significance of the UK Government and Council of Europe’s official recognition of the Cornish as a protected National Minority in April 2014,[3] it is essential women’s voices and experiences are fully recognised and widely understood. In particular, the Hypatia Trust is interested in supporting the growing consciousness amongst young people in Cornwall of their Cornishness is evident in the Pupil Level Annual Schools Census (PLASC) which returned 37% identifying as Cornish in 2011, rising to 48% in 2014.[4]

The first phase of this project is to put in place a programme to address the training of new editors and the generation of new women-centred content. This phase will also lead to scoping new sources of funding to support the project beyond the development phase, in particular to develop a cohort of new female editors based in or interested in Cornwall and the Isles of Scilly.

2. Develop means to officially partner with Wikimedia, seek approval as a partner project and to announce the Wikipedian-in-Residence to the sector and Wikimedia communities

5. Prioritise subject areas for research based on collection and researcher strengths

6. Connect with partners and scholars and advanced students currently researching women in Cornwall and Scilly or those who might be interested in doing so

7. Draw up criteria for selecting team of volunteer researchers and writers

8. Identify skills gaps and draw up training plan for researchers and writers

10. Establish benchmarks, targets and milestones for next stage – pilot phase

12. Identify supporting small grants and partnerships to continue the project.

Duties of the Wikimedian In Residence[edit | edit source]

The duties of the Wikimedian In Residence

• Create a network of new editors, writers, creators and contributors

• Ensure the Workplan is undertaken in a timely fashion, making adaptations as required

• Produce a plan for the continued funding and activity on this project.

Following the completion of the training and development phase in April we are now focusing on identifying content to create and edit. Editors have either chosen their own subject to edit into an existing article, or create anew, or will assist with the List of Women in Cornwall and the Isles of Scilly. The Wikimedia In Residence now operates entirely on a voluntary basis and the group meets on a monthly basis.

We want to identify existing researchers interested in volunteering time to research, write and photograph subjects. We will match volunteers on the basis of their interests as well as research and writing skills. We will also identify tasks for those who may not have the skills in research and writing or would prefer to undertake a different kinds of task such as strategic editing, identifying gaps, sorting the information we hold in the Elizabeth Treffry Collection or undertaking photographic work to contribute to Wikimedia Commons.

Once this project is well established we intend to widen participation to individuals and groups with broader needs and interests and who require more intensive support and training. It would be particularly welcome to find a way to involve educationally disadvantaged girls and women—a group poorly served by cultural activity in Cornwall.

Wikipedia offers self-directed training as well as supporting introductory and training events (with grant and resource support). The training and skills programme will be based around these resources. Once the Wikipedian-in-Residence has undertaken requisite training and gained some developmental experience of editing and writing articles these can be cascaded down do different groups at training events and themed Edit-a-Thons.

As a result of local press publicity a number of volunteers have come forward interested to find out about contributing to this project and getting training in editing and writing articles for Wikipedia.

An invitation was sent to these volunteers in addition to others with an interest in women's history and Cornwall on 16 January 2017.

At the event the group filled in a questionnaire to gauge their digital and research needs so the project can better support their work on Wikipedia. The questionnaire also asked about the group's research interests and key aims. The top two goals identified by the the group are to: help add more information on Cornish subjects on Wikipedia and to help address the gender gap on Wikipedia.

Following the welcome event and collecting information about the learning needs of the group, Hypatia's budding Wikimedians were invited to take part in a two-part training session at the Hypatia Trust's headquarters in Penzance, Cornwall. The first part of the session introduced the group to our common learning aims, followed by an explanation of the Wikipedia movement and the role of Wikimedia UK in supporting projects like this. The group was then trained in the basics of Wikipedia editing, including opportunities to ask questions about common pitfalls and top tips such as starting with small edits to existing pages rather than contemplating writing an article from scratch. There followed two hours of editing practice so that the group could test out their new skills.

The event was part of a drop-in open day for visitors to browse the women's reference library and see Wikimedians in action (2pm-4pm). Visitors were informed about Hypatia's campaign to spread knowledge about the deeds of Cornish women through the world's biggest free source of information.

The List article was expanded and more names of notable women added. We focused on notable women who had made an impact during the First World War and women historically and currently involved in Cornish politics. 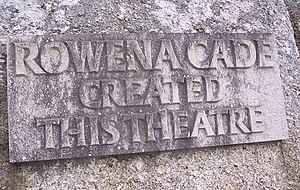 When a new stub article on Rowena Cade, founder and builder of the Minack Theatre was published by one of our team on 26 June, it was immediately deleted by a Wikipedia deletion patroller on the basis that the subject was not notable and did not contain enough external references. The stub article was originally referenced by three different sources and the subject was the creator of one of the most famous outdoor theatres in the world. While there is an extensive article on the theatre itself there was nothing on its female creator. Following a plea for help on Twitter, the article was reinstated. Wikimedia UK and Women in Red helped raise the profile of Rowena Cade to improve and extend the article to protect it from deletion.[6]

The project’s base is the Elizabeth Treffry Reading Room, Room 211, Krowji, West Park, Redruth, Cornwall, TR15 3AJ. This is the home of the Elizabeth Treffry Collection of books on women in Cornwall and the Isles of Scilly. It is open by prior arrangement through Azook, tel: 01209 311070.

Events may also take place at the Hypatia Trust's headquarters in Penzance which has a meeting room and mini auditorium at: The Hypatia Trust, Lower Ground Floor, The Regent, Chapel Street, Penzance, Cornwall, TR18 4AE.

It is a stated aim of this development phase to seek strategic partnerships with Wikimedia-related and/or open knowledge related organisations and experts. The Hypatia Trust and Wikimedia UK entered into a formal partnership in November 2016.[7]

The Hypatia Trust is looking for the following benefits from a partnership with Wikimedia UK:

• In-kind support, advice and guidance from your staff to develop a longer-term project

• In-kind advice and guidance on achievable targets, milestones and benchmarks

• Networking opportunities through invitations to events and conferences

• Networking opportunities through connections with related projects and people

• Access to statistics and analytics on the use of content we publish via Wikipedia, Commons or sister sites.

This project is helping contribute to fulfilling the strategic aims of Wikimedia UK, in particular:

• This project will help fulfill Strategic Goal 1, to increase the quality and quantity of coverage of subjects underrepresented on Wikipedia and its sister sites, primarily through rebalancing the gender bias against female subjects.

• The Hypatia Trust will help Wikimedia UK achieve Strategic Goal 2, to support the development of open knowledge in the UK and advocating for change at sectoral and public policy level. As a small but established member of the GLAM sector that operates independently of politics and larger institutions we have the freedom to produce independent research and seek to positively influence our GLAM sector colleagues. The Hypatia Trust’s international network can also be utilised to share the benefits of generating and publishing according to open knowledge principles.

Following the formal development and training stage of this project we now operate with a Memorandum of Understanding between the Hypatia Trust and Wikimedia UK to continue to support this project and its volunteers and to report on progress with our work. Progress will be logged on this project page.