UK Wikimedian of the Year 2016

The UK Wikimedian of the Year is an annual award given by Wikimedia UK to thank those in the UK or abroad who have helped the UK Wikimedia movement. These volunteers and institutions have gone above and beyond the call of duty to help bring open knowledge to all. The 2016 winners will be announced at the Annual General Meeting on 9th July.

The prizes were first awarded at WikiConference UK 2012 at the Science Museum on 12 May 2012. The purpose of the awards is to recognise achievement, and inspire efforts for next year!

The winners and nominating statements are below 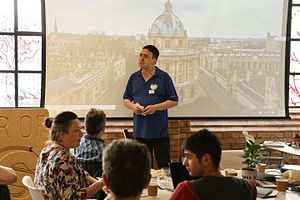 Martin Poulter at the 2016 AGM

Martin organised the Wikipedia Science Conference in 2015 in as a volunteer for WMUK in conjunction with the Wellcome Trust. I was an attendee at this conference and it amazes me this was done on no budget from WMUK; it was very well done. More information about his contributions are available here.

I'd like this award to go to the OER16 organisers Melissa Highton and Lorna Campbell for giving Wikimedians their own stream and high visibility within this prestigious international conference. In a conference which already had sessions and presentations related to Wikimedia projects, four Wikimedians In Residence (myself included) ran sessions at the conference, some with financial support from the conference to help them attend. See Open Educational Resources conference#2016 for details of the sessions. The topics discussed at the OER conference reflect the interests and direction of the Open Education movement in the UK and beyond, so the prominence given to Wikimedia projects and to Wikimedians In Residence reflects another step into the mainstream for our movement. It was a proactive choice by the organisers to support Wikimedians, and it has created additional interest in Wikimedia activity, including requests from the University of Oxford and University of the West of England for follow-up events, so for me this is the partnership success of the past year.

For me, the unsung hero in the UK Wikimedian community of the past year is Nav. A Wikidata volunteer, Nav has been sharing his expertise by email as well as by person in events including the Wikipedia Science Conference. He has helped John Cummings (WIR at UNESCO) with the bulk import of data from UNESCO and helped Ewan McAndrew (WIR at the University of Edinburgh) to get custom queries from the Wikidata Query Service. Both of these efforts have helped my own work with the University of Oxford. Nav's a teacher by background and it comes naturally to him to help people—geeks or newcomers—to learn the exciting new things Wikimedia is doing.