Passport, List of who is speaking, train ticket and QRpedia codes

The Austrian National Railway is an impressive building in the centre of Vienna. I was told it was a plain building when asking for directions but this is only in comparison to other buildings in Vienna which are built on a grand scale during the city's days of empire.

I arrived during the closing hours of the Hackathon that preceded the main conference and then ran quietly in parallel to the main conference. The prizes for this were awarded as part of the conference’s closing ceremony. I was welcomed by David Haskiya who was running and involved in judging the Hackathon. Various projects were shaping them selves in tyhe room where several dozen laptops took a pounding from their studious owners. David shared with me that one of the programmers was working on an imitation of QRpedia. Their version of “QRpedia” was intended to also have multi-lingual QR codes that also sensed the users language. However in their case it linked to the Europeana database rather than Wikipedia.

Sadly when the prizes were awarded on the final day, Euro-QR-pedia didn’t feature, but David told me that this because the programmer had had to work on more mundane, but urgent, jobs. What was pleasing was that all of the three winning projects featured Wikipedia or DBpedia technology. It was apparent that DBpedia and to a lesser extent Freebase was being used as a universal resource for processing Europeana’s data.

The conference opened on the second day I was in Vienna with a talk by ????? about Eureanna and copyright. This was a revelation. Europeana have realised that they need to be “open”. “Open” was the buzz word of this conference.

Europeana are entrusted with Europe’s cultural heritage and there main idea was to take the data of every GLAM in Europe and process it into a relational database. This database could then be seen by the world and the information would be shared. This effort required a vast army of people to translate the information from one database schema to another whilst trying to minimise the information loss. I don’t know but I can imagine that this would require a vast number of fixes, “if-then”, and look-up tables to preserve the information. Europeana are not in charge of all their feeder databases so this means that their can be no successful standardisation. I did ask how many hits the Europeana database got. I was told and asked to not tweet it... before the person saw that I was from Wikimedia. However we are not Wikileaks so I won’t tell you the figure... but an hour on Wikipedia gets more hits.

Wikipedia was seen as the model of what Europeana aspires to be or might have been. It has realised that it needs open licensing because it must abide by the precise letter of the law. It knows that the world consists of tweets and blogs and that although it would like its pictures to be blogged and tweeted about it knows that these blogs will appear on sites that have adverts. One delegate said that he felt that putting the whole cultural pile into Wikipedia was a good option. However they have spent 149m euros resisting that step.

In a previous life, I won a European commissions call for projects in 1989 with an idea for harmonising Europe’s metal/material engineering industry based on the idea that we could have a common relational database that would hold all the data (and meta data) we needed. This project eventually got absorbed into the STEP project which imagined that if we could create a dtabase that was detailed enough to hold all the world’s information on product data then we could seamlessly translate data from one database schema to another. The arguement went that if you could and a potential partner could write a translator from your database into this super database then you had established a common language. You would not need the superdatabase as you merely had to read and write from an imagined database. I believe they did get STEP working for data in the domain of geometry but the dream had been much more.

Europeana are suffering from the problem that their funding body believes that they can achieve this level of database harmony because it is politically desirable. One group of researchers were proudly presenting a 6 foot high poster covered in a font size 5 flowchart that showed how you understand the copyright of a given item. They said it was how you released an item from copyright, but it was obviously designed to do the exact opposite.

The database flow was from my local museum down to streams and then rivers of information watched over by various groups who received funding for keeping this network flowing. The problem is that I know my local museum has errors in their database and they are not maintaining it as well as they might. This poor information flows with all the rest into the sea that is Europeana. Every small museum knows this is happening and enjoys the funding but it is no ones interest to make it work as the GLAMs are not sharing their information for ideological reasons but because they cannot resist the political will or the funding that flows to this idea. You can see that the steams and rivers have errors but there is no mechanism to get the GLAMs database repaired.

Back to the conference. Stimulating talk by Bill Thompson who talks of those who do not use Twitter et al as the new illiterate. Most of day one taken up with meta data and Open Source.

I went to a session by the programmers. They have established an API but the data is not open so it can only be used in a limited way. And there were still people there who thought that the reason why they didn’t have 400m users was because their user interface needs improvement!

One interesting cartoon showed two pigs smiling to each other where the first comments on how good the free accommodation is and other says how fine the free food is. The point being made was that if you can’t see the product then maybe you are the product. Are they calling me a pig?

Mia Ridge gave an interesting plenary where she explained the value of widening your engagement. She explained that professionals would tag up a database with precise terms, but a third party was much more likely to tag a picture with “happiness” and although scientifically imprecise as a concept - its a very useful tag to be able to search on. She also spoke about how we should encourage users to feel valued. 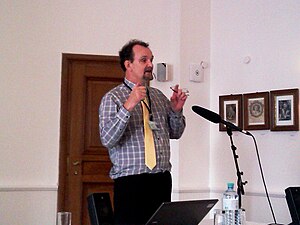 Mine was the first talk on the subject of crowdsoucing. I spoke about why WMUK had not joined “Wiki Loves Monuments” - not because it isn’t a brilliant project but a) we had Geograph b) we didn’t have access to HMGOV database c) we had no lead d) we loved GLAM. I spoke about British Museum, Derby Museum and QRpedia. (Which are covered elsewhere ad nauseum). After the talk I was invited to repeat it in Norway in November.

Talk after mine was Alun Edwards from Oxford Uni. Very clever use of HTML5 to tag and annotate moving video in a web 2.0 way. Maybe non-notable items but very high public engagement. WMUK and he are now talking about collaboration.

Guy from Galaxy Zoo was interesting. 470,000 volunteers and some of the people now have their names on Scientific papers. This and Oldweather show what we can achieve. How do we get 470,000 to actively get involved with Wikipedia? Note that their volunteers knew they were playing a game but their main reward was knowing they had helped with something useful. We need to use this idea when fundraising and giving feedback.

There are a lot of clever people and they have access to a great deal of the digital data that describes’s Europe’s cultural heritage. They admire Wikipedia and they rely on DBpedia to decode the noise and add extra value to the data they receive from the GLAMs. It reminds me of Star Wars (The US Military thing) in that there is some very cool stuff happening (and we need to be involved) but I’m not sure that this is going to work without some very large changes to their objectives - and a lot of re-education of the data owners. To be fair, the leaders are trying very hard. I’m a big fan of Jill Cousin’s work. Is it possible to get the GLAMs to agree that their future lies in sharing? I think the idea of working with those who can see the future is less democratic but may deliver more benefit to our readers.